School brings back a sense of community with centre design

In 2006, Fereday Pollard won a competitive tender to work on three projects under the Sure Start Programme, aimed at providing children's centres and community facilities, some integrated within existing primary schools. The practice successfully tendered for the design work at Newstead Children's Centre. The brief was to extend the existing centre to create a new entrance and reception, crèche, offices and community centre, all with direct access to the existing facilities. The new extension also sought to overcome lack of storage space in the existing centre. 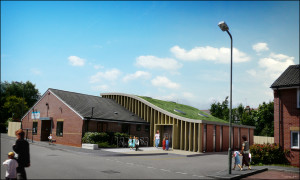 Eugene Soler, Project Architect at Fereday Pollard said "The building was designed to reflect the local authority's innovative approach to educational design in its borough. The design responds to a number of site considerations and is very much directed at creating a new focal point for both the users and the community at large and a vibrant addition to the existing building."

The design of the building took account of the open area to the right and which formed the natural place for the extension. The mass of the extension itself was largely determined by the location and orientation of surrounding properties and the need to create a double height mezzanine internally to maximise space. The new building was designed with a subtle curve and green roof with vertical timber blades to all three elevations which provided shading from the south facing main facade. The works on site start in February 2009 and are expected to be completed in August 2009.

Barnet's Cabinet member for Children's Service, Cllr Fiona Bulmer, said: "Newstead is the latest investment by the Council in new buildings for schools and children's centres. It will help to improve even further the excellent services available to parents in Barnet."